In this tutorial, we will learn how to integrate Syntacts into Unity projects. Since Unity uses C# as its scripting language, programming Syntacts in Unity is no different than programming in pure C#. As such, this tutorial will not cover the C# API - refer to the official C# tutorial for that. Instead, we will discuss important details and tips that are specific to Unity.

The Syntacts Release folder contains a Unity demo you may choose to explore. Navigate to unity/SyntactsDemo/Assets/Demo and open Demo.unity. When Unity finishes loading, press the play button in the editor. You should see a ball bouncing on the screen, and a Play Library Signal button in the top-left corner. You should also hear various sound effects. The demo uses Syntacts to generate these sounds in the same way we might use Syntacts to generate haptic vibrations. The only difference is that we have chosen base frequencies in the hearing range. Although this demo is quite simple, three key features are on display:

Adding Syntacts to a new or existing Unity project is simple. From the Release folder, import unity/syntacts.unitypackage into your project either by 1) dragging it into the project window of the editor, or 2) from the editor menu Assets -> Import Package -> Custom Package …. Click Import and the Syntacts assets will be added to the top level of your project:

Only two scripts are needed to use Syntacts:

The plugin folder contains syntacts_c.dll, the compiled Syntacts dynamic library which is loaded by Unity, and the editor folder contains custom Unity editor code. You can safely ignore both.

Although not required, the SyntactsHub component is useful for opening and managing the lifetime of a Syntacts device session. Simply attach this component to an existing or empty GameObject in your scene: 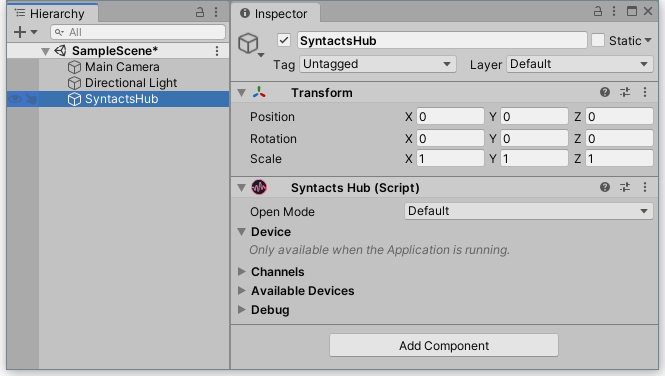 You can use the SyntactsHub to open an audio device in the following modes:

The device session will be opened in the Awake call of SyntactsHub.cs, and closed in OnApplicationQuit. This means that you should only reference the SyntactsHub from other scripts in between these event function calls (see Unity Order of Execution for more details).

If you choose not to use the SyntactsHub, you can always open and close device sessions from your own scripts. Just be sure to call Session.Dispose before Unity quits, otherwise, you will create a memory leak.

Assuming you’ve chosen to use SyntactsHub.cs, usage typically looks something like this:

First, we find the SyntactsHub in the scene inside of Start and save a local reference to hub. From here, we can access hubs’ Session object and use it as we would in the standard C# API. A few important notes:

A common requirement of designing haptic effects is needing to tune them online. Instead of repeatedly playing, stopping, and editing your code, you can use Syntacts’ Library features and the GUI to iterate in play mode. First, create a string variable containing the name of the signal to be loaded. You can optionally make this public and assign it from the Unity editor.

Now, when we modify my_signal from the Syntacts GUI and save it, Unity will load the most recent copy without ever having to exit play mode!